Great article from Partick Thistle: Blast From The Past. Original article HERE 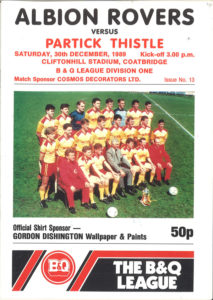 Needless to say, I was very unhappy with the outcome of this match, but what I should have been doing was sparing a thought for our winger John Flood, who scored a hat-trick away from home and yet finished up on the losing side. His day had begun brilliantly with a goal in the very first minute. Better still was to follow when Calum Campbell added a second after 3 minutes and the travelling Firhilll fans sat back to enjoy a feast of attacking football with goals galore. Wait a minute, though. What’s going on? Rovers scored after 11 minutes and again 17 minutes later. Our lead had been wiped out. However, John Flood popped up to score again after 29 minutes, and we went on to lead 3-2 at half-time. 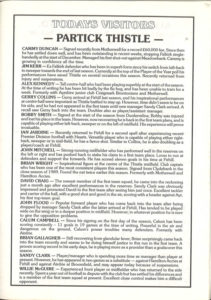 We should have realised by now that we were in a game after all. All seemed to be well when the irrepressible John Flood completed his hat-trick after 55 minutes. However, the home side re-doubled their efforts and back they came with a renewed determination. Our defence was now all over the place and Rovers scored in 64 minutes and incredibly levelled things up in 72 minutes. To say Thistle were shell-shocked is putting it mildly and worse was still to come. We conceded again with 15 minutes to go and there was no way back for us. A game that had started so promisingly ended in disaster.

I remember how in the Boardroom at the final whistle the home Chairman put forward his hand and said – “Great game!” I muttered a kind of stifled “yes” and kept my remaining thoughts to myself! One has always to maintain sporting dignity and integrity, but it can be hard at times. 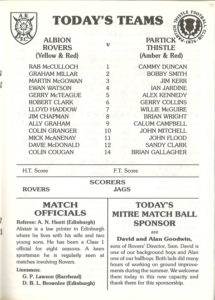 There are times when other factors are more important than the game itself. It’s hard to accept that Cammy Duncan and Bobby Smith are no longer with us – taken away while still comparatively young men.

Fashion note – As you know, Albion Rovers play in red and yellow. For the above match, Thistle players in white jerseys and white shorts looked for all the world like Real Madrid – well, not exactly